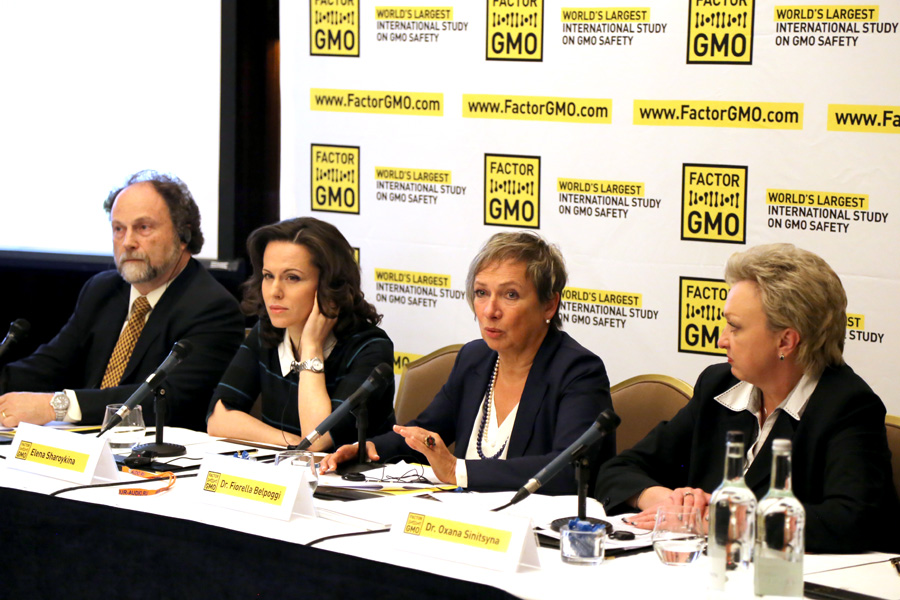 World’s Largest Ever Study on GMO and Pesticide Safety

The $ 25 million ‘Factor GMO’ study will investigate the health effects of a genetically modified (GMO) crop that has been in our food and animal feed supplies for many years. It will answer the question: Is this GMO food and associated pesticide (Glyphosate / Roundup) safe for human health?

Farmers, retailers, governments, scientists and consumers have been involved in a heated international debate since GM foods were introduced in 1994. However, there has never been a scientific study that is comprehensive enough to give them a clear answer regarding the safety for human health of any one GM food – until now.

Factor GMO will also add invaluable data of unprecedented power to enable regulators, governments and the general public of every country to answer the question: Is the GM food and associated pesticide tested safe at real-world levels of consumption and exposure?

Factor GMO’s preparatory phase started in early 2014. The full experiment will begin in 2015 and will last 2-3 years, with interim results being published at regular intervals during that time.

The study will test a herbicide-tolerant GM maize and realistic levels of the glyphosate herbicide it is engineered to be grown with.

The study will take place at undisclosed locations in Western Europe and Russia. The exact locations of the study must be kept confidential for security reasons as Factor GMO wants to avoid any outside interference that could compromise the day-to-day running of the experiments and/or the final results.

Laboratory animals (rats) will be fed the GM food and pesticides according to a protocol whose scale, rigour and range of measurements will meet and exceed current international standards for testing the toxicity of GM foods, pesticides, and other chemicals.

The experiment uses more rigorous approaches to investigate the fundamental question of the safety of GM foods and pesticides than are currently required by regulators. It will provide sufficient data to say with confidence whether the real world levels of consumption of the GM food and its associated pesticide are safe.

The three arms (toxicity, carcinogenicity and multi-generational arms) of the experiment will enable vital questions to be answered, such as:

Is the GM food (or its associated pesticide) toxic to organ systems over the long-term?

Does the GM food (or its associated pesticide) cause cancer?

Does the GM food (or its associated pesticide) reduce fertility or cause birth defects?

Is the mixture of chemicals present in Roundup herbicide more or less toxic than its active ingredient glyphosate?

The scientists involved in Factor GMO come from a ‘neutral’ background, in that they have no connection to the biotech industry or the anti-GMO movement, a factor that will add credibility to the results.

The 3 scientists on the study review board are internationally respected experts in their fields:

Dr. Oxana Sinitsyna; Deputy Director for Science at the Federal State Organization “A. N. Sysin Research Institute of Human Ecology and Environmental Health” of the Ministry of Health of the Russian Federation, Moscow.

“The scale and format of this research project will allow us to create a really objective and comprehensive data set on the mechanics of the impacts of a GMO diet the health of living organisms over the long term. From a scientific point of view the ‘Factor GMO’ project is highly ambitious, which makes it very interesting, for both the public and for the scientists involved.

“The evaluation of allergenic and immunotoxic effects are accompanied by the possibility of evaluating general toxicity and carcinogenic long-term effects (not just 90 days, but long-term over 2-3 years) of the use of appropriate GMO diets. In addition, there has never been comprehensive research investigating the effects of a GM food on reproductive function. The protocol of the ‘Factor GMO’ project includes the assessment of the impacts of a GM food on 5 generations, not only 2, as is suggested in the OECD* recommendations. Due to the uniqueness of the project, it’s a special honour and responsibility for me to represent Russia on the Factor GMO review board. With my international colleagues, we will make every effort to ensure a comprehensive research experiment with an impeccable reputation.”

* The Organisation for Economic Cooperation and Development, which sets protocols for industry safety studies on chemicals.

“The Factor GMO study has the potential to provide invaluable information on the health effects of a commercialized, herbicide-resistant GM food and its associated herbicide. The cultivation of herbicide resistant crops is widespread in the US, and the use of the herbicides to which these crops are resistant has increased many-fold in the decades since they were introduced. There is a notable lack of published, peer-reviewed data on their safety, as well as data on the safety of the increased use of herbicides with which they are grown. The Factor GMO study could be very useful in reducing the uncertainty about the safety of these products.”

Dr. Fiorella Belpoggi (on the Review Board as a Fellow of the Collegium Ramazzini); Director and Chief of Pathology of the Cesare Maltoni Cancer Research Centre of the Ramazzini Institute, Bentivoglio, Italy.

“The concern over genetically modified (GM) crops is largely due to the fact that plant breeders can construct synthetic DNA sequences and insert these into crop genomes, effectively adding new traits to the plant. This raises enormous possibilities for developing benign products, but equally it has the potential to create products with unwanted traits and side-effects. The animal feeding studies performed up to now to study GM-related risks for consumers vary in test diet, length, and type of animal used, making the results difficult to compare and interpret. Most are too short to detect potential long-term effects. The proposed integrated rat-feeding study will investigate a wide range of possible health effects in consistent experimental conditions. The long-term study design will reveal any effects that take time to show up. The Factor GMO study could provide the detailed data needed for a scientific evidenced-based risk assessment of possible human health hazards from the GM crop and its associated pesticide.”

Up to this stage private individuals from across Russia and the EU have put forward the full funds (to be disclosed next year). We cannot disclose the exact amount of funds collected until now due to contractual agreements with the funders, however we can say that a high % of the total needed has been secured, allowing us to start the experimental phase in Spring 2015.

The close to $25 million in funding needed for this project has been/is being sourced from around the world.

Factor GMO has not and will not accept funds from the industry that manufactures GM crops and their associated pesticides.

The funders will have no influence on the design, results, or publication of the study.

The Russian National Association for Genetic Safety (NAGS) is the initiator and coordinator of the Factor GMO experiment. However, NAGS has had and will have no involvement in designing the study, in the day-to-day running of the experiment, or in the gathering, interpretation, or publication of the scientific results. These aspects have been and will continue to be decided and controlled by the independent and neutral scientific review board.

The evaluation of correct protocols and the selection of scientists to work directly on the experimental phase of the study is under the complete control of the neutral scientific review board. NAGS has not had any involvement in this process.

NAGS was formed in 2004 as a non-governmental, non-profit organization based in Moscow, Russia. NAGS’s aim is “to contribute the protection of biological and genetic safety of humankind and the environment, and to promote sustainable development.”

NAGS has always promoted the idea of comprehensive safety studies on GMOs and their associated pesticides and has therefore taken on the role of coordinating the funding and security for the Factor GMO study.

Elena Sharoykina, initiator of the project ‘Factor GMO’, director and co-founder of NAGS:

“Comprehensive scientific safety studies on GMOs and their related pesticides are long overdue. All previous studies caused controversy for various reasons: choice of animal, insufficient statistics, duration of tests, research parameters, and researchers’ connections to the anti-GMO movement or the biotech industry. ‘Factor GMO’ is intended to remedy the situation. The project organizers have considered all of the points of disagreement and distrust surrounding this subject. Factor GMO has in its arsenal a scientific protocol drawn up with all the necessary standards, an international scientific team of leading professionals with a neutral background, independent funding, and perhaps most importantly, full transparency. Food is the main source of energy for all living beings, and its safety is the key to their health and well-being, as well as to sustainable development. In order to prevent irreversible consequences, humankind must ensure the total safety of GM crops and their associated pesticides before they are planted even more widely.